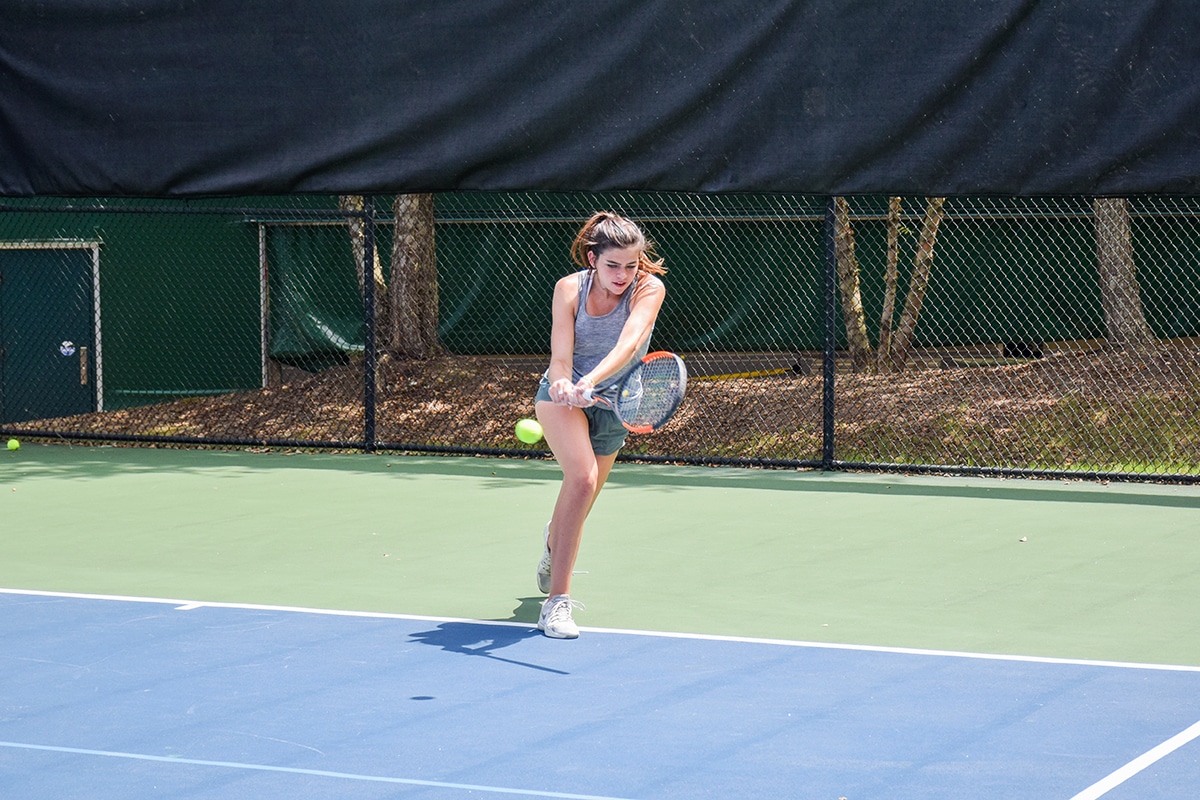 As coaches, we often utilize the word “Split Step” in terms of being a mistake our players have made. Instead of reacting to a player’s mistake, let’s be proactive and tell our students what we expect before they fail to use the split step. Ultimately, this skill should become a weapon as opposed to a weakness. With a solid foundation and knowledge of this skill set, players will know exactly what is expected of them. The following are a list of points of emphasis when teaching the split step:

1. The player should establish a solid, wide base well before they make contact with the ball.

Their feet should be slightly wider than shoulder length. Perhaps, use the length of the racket to illustrate this distance. You can simply have the student place their racket in front of them, with feet on both right and left edges of the frame and grip (i.e. at least 27 inches apart). Have them bend using their knees, not the wais, and freeze in this position after raising their head up. Key variables should be:

1. Chest forward, leaning slightly over their belly button or waist.

2. Knees slightly bent and not in a locked position.

3. Students should be balanced, with their weight distributed properly to the balls of their feet, NOT the heels.

2. Allow your players to know they are in attack-mode, not chill-out mode. This position is used to produce enough momentum that will assist them in pushing off in any, certain direction. You can tell them this is NOT a STatic position, and to NOT be STationary, STanding STill, or STopped. Instead, tell players they must be rocking on the balls of their feet, ready to pounce, and engaged!

3. A player needs to have subtle moments that occur almost simultaneously with the opponent’s strike or contact of the ball before forming the split step.

Some examples include: staggering their feet and taking a stride into the split step position or simply subtly leaning in a direction as part of the split. In the video posted on our social media channels, UNCG Commit Olivia Gallagher demonstrates shading or leaning to her strength and making sure the split step is not a stop step that builds momentum in the direction she wants to move. This is also a great way to create spacing for your groundstrokes prior to executing them. Players may be familiar with similar movements before returning a serve. Nothing changes about a split step, but the movement and actions taken prior to splitting can differ slightly, varying from player to player.

Fun Ideas: Split step means to SPLIT, not to STOP. It’s not called a stop step for that reason. To find this position, ask a student to stand in what they feel is a good split step, then ask them to close their eyes. Inform them that you are going to push on their back or head. They will create resistance to your push if they get wider and lean slightly forward with their chest over the belly button in a coiled position, thus realizing they did not have proper positioning before you pushed them. For younger developmental students, use the visual of a snowman. Use the 3 sections to ask what’s the most important. The answer is the base or the bottom that supports the middle and the top. It’s the widest of the 3 sections to be able to support the other.

Additional Notes: To execute a good split step, have students perform the crossover recovery step after hitting the ball with a wide base. DO NOT ALLOW the student to stop when trying to implement a good split step. Call it a movement that helps them to become in control of their body again in order to push off in the direction of the next shot while still maintaining balance. Let’s be proactive, not reactive. You can plan ahead instead of learning from your mistakes after the fact. By setting up properly and applying a dynamic, engaged position just prior to your opponent striking the ball, your ability to cover your opponent’s best strokes will be made easier, I PROMISE! I don’t see the speed of the game becoming any slower; therefore, I see the need to emphasize and reinforce the preparatory phase (i.e. the split). Let’s look athletic before, during, and after. This sport requires a proactive and athletic look before anything even happens.