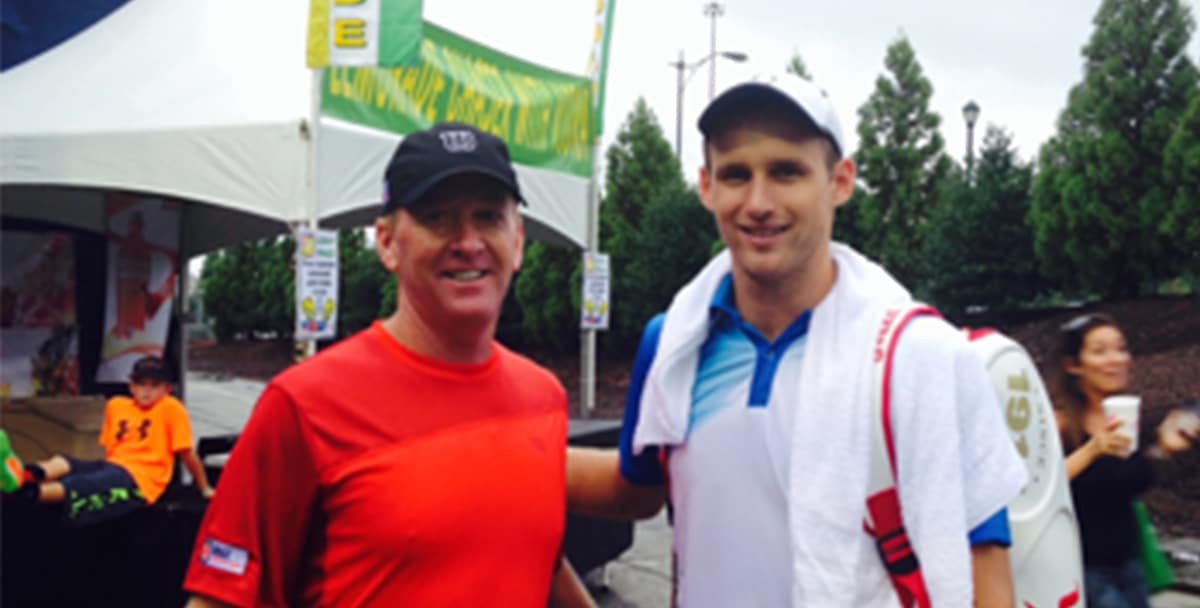 July brings two things to our Atlanta tennis community. First, it brings the heat! The true dog days of summer are here, and bringing 3 or 4 shirts to work is just another day for our pros. July also brings the best tennis players in the world to town, as the BBT Atlanta Open takes place at Atlantic Station. It is an exciting week for all local tennis fans, but for me it a very special week. I, along with Patricia Jensen (the Jensen Brothers’ mom), coordinate the Ballboys/girls for our ATP tour stop. It is a long, hot week, but watching the youth of Atlanta patrolling the courts at the BBT Atlanta Open is a great thrill for us. Growing up in St. Louis, I was a ballboy on anything and everything that rolled through town, and being able to pass on my knowledge and experience is a great privilege. I have been on the court with Stan Smith, John Newcombe, Arthur Ashe, Rod Laver, Bjorn Borg, Billie Jean King, and Jimmy Connors, and being up close to the action only fueled my love for the sport of tennis!
Being a ballboy for the stars isn’t always smooth sailing though. Sometime around 1973, I was on court for a match between Jimmy Connors and Ilie Nastase. Both players were known for their on-court antics, so to say that we were all on our toes is a great understatement! I was the ballboy in the back corner and was on one knee so as not to obstruct the view of the fans in the front rows. During one point, the left-handed Connors was pulled out wide to hit a backhand. He hit it back crosscourt to Nastase’s forehand, which Nastase took up the line as an approach shot. The ball was coming straight towards me. Connors sprinted across the court and was angling back toward me to catch up with the deep approach. We had been instructed not to move when a player was running toward us since they could see where we were and would take evasive action if needed. I froze as Connors and the ball kept coming at me. Jimmy’s Wilson T2000 made contact with the ball about 6 inches in front of my face, and he missed the forehand pass wide.  He flew by me and hopped over the small advertising signs on the side of the court. As he came back on the court he walked straight toward me and said, “Next time move or I’m going to take your head off!”. I was proud of myself for following orders, but I would have paid a high price if the wires on the side of that T2000 had made contact with my face!
My second ballboy story occurred more than 40 years after the first! On Sunday, July 20, 2014, I was working with the ball kids at the BBT Atlanta Open. It was the second round of the qualifying weekend, and we had a full slate of matches to go. As fate would have it, Sunday turned out to be a day of rain. Not all-day rain, but pop-up showers that kept interrupting the matches. We got through most of the matches but had one last match involving Georgia Tech star Kevin King. Because of the rain delays, the match went well past midnight. Most of our ball kids had been there all day, so as the night went on more and more kids disappeared. We eventually got to the point where I only had 4 kids on the court. This is about the least amount of kids you can have on the court and still do a good job, but the kids had a long day and were dragging.
I decided to lace them up and jump in to help. It was a lot of fun and we finished Kevin’s match about 1:30 AM. I think I hold the record for oldest Ballboy at the BBT Atlanta Open at the age of 53! The following day Kevin was nice enough to take a picture with me to commemorate the event.
If anyone out there is interested in becoming a ballboy/girl for the BBT Atlanta Open please visit the tournament website and click on the “Tournament Info” menu item, and hit “Volunteer” on that pull-down menu. I highly recommend it as a way to get close to the best in the world, and you may end up with some memorable stories as well!
Atlanta Ball Boys Ball Kids Ballboy Diaries BB&T Open
UTAThe Ballboy Diaries: July 2019 Edition09.22.2019